“Can you call it NIMBYism if the project is already in your back yard?”

History buffs know the Long Island Rail Road was built for one purpose: Getting people from Brooklyn to Boston.

And it might have worked, if a rival railroad hadn’t figured out the south shore of Connecticut was a better route. Bankrupt and with miles of empty track, the LIRR was forced to settle for the only other business around: Moving people to New York City and back again.

It wasn’t much of a business until suburbia came along.

Now, the LIRR is one of the nation’s top commuter lines, with almost 85 million passengers last year.

Today, that original line to Greenport is the backbone of a system of nine branches, five of which converge along the 9.8 miles between Hicksville and Floral Park. At peak times, it’s the busiest stretch of track in the world.

So busy, in fact, that there is neither time nor space for trains that don’t fit the LIRR’s core mission of moving commuters west in the morning and east at night. For the rush hours, the trains move in one direction only. If it’s not your direction, well, have you considered the LIE?

Transit officials have been planning to fix the problem for almost 40 years by adding a third track, eliminating the bottleneck and opening Long Island to trainloads of reverse commuters from New York City. MTA officials now think they can get it built by 2025.

The project’s potential is staggering: 14,000 new jobs, $3 billion in added personal income and a $5.6 billion boost to the overall economy, according to data compiled by the Long Island Index. Just laying the track would trigger $1.2 billion in local spending and create thousands of construction jobs, which is why the unions are all aboard. And more trains would mean less waiting time, boosting ridership and reducing auto emissions.

There’s plenty for the pols, too, including $40 million in new sales tax receipts and a $100 million surge in property levies. Imagine the future budget shortages that could be created with that kind of money! 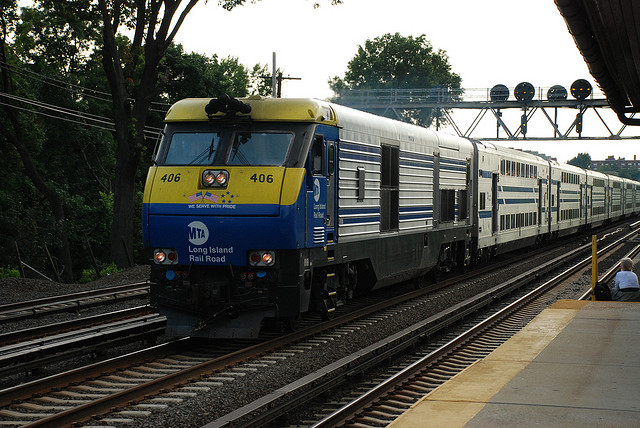 The really big thinkers see even more. A tech-smart, innovation economy that finally moves us past the Cold War. Thousands of good-paying jobs in biotech and medical devices that will end the flight of young people and restore the Island’s vitality. Better links to New York City, the world’s financial capital and a booming technology hub in its own right.

Pie in the sky? No, actually. Other suburban lines that have built extra tracks are enjoying the exact economic glow touted here, including the job growth, development activity and broader tax base. Locally, reverse commuters have become locomotives, pun intended, for the economies of Harlem, Northern New Jersey and Connecticut.

OK, in hindsight, the transit authority should have acted a little sooner. Today, those 9.8 miles of track are lined with some of Long Island’s densest development, including hundreds of homes and businesses, parks and softball fields.

No surprise, then, that 12,000 residents have signed petitions opposing the project, saying they fear increased noise, vibration and the loss of their suburban quality of life. (Yes, there is quality of suburban life if you live along two tracks. None, apparently, on three.)

Local politicians, few of whom have ever won an election by 12,000 votes, have flocked to the cause like moths to a porch light. No more tracks, they say. Future, schmuture. We don’t need no stinking reverse commuters.

And so the project languishes, innovation economy on hold. All those departing young people must be leaving by car.