You’ve probably heard Long Island is having trouble hanging onto its young people, particularly those in the coveted 18 to 34 cohort, the age group most likely to take the jobs we don’t want at wages we couldn’t possibly survive on. Well, unless we were also still living at home.

“The scary thing about young people leaving Long Island is what they are leaving behind: Us.”

The youth decline is variously called “brain drain” or “birth dearth,” depending on whether you believe our bright young people are leaving on their own, or whether the slackers of the previous generation just didn’t procreate enough to keep the region viable. It’s probably a combination of both, but calling it “brain dearth” doesn’t seem very helpful.

Either way, the numbers are breathtaking. The percentage of young people on the Island has slipped steadily over the past 40 years, from more than 16 percent of the population in 1970 to 10-and-change today. That’s a loss of 150,000 young people for our society, and with it a decline in our collective vitality, creative thought, our very passion and sense of hopefulness for the future.

And they would have purchased enormous amounts of consumer goods. Just saying.

The brain drain believers blame this outflux on the shortage of good-paying jobs on Long Island, and there is evidence to support that. The region’s business base has been in tremulous transition since the 1970s, when defense ruled and good-paying manufacturing jobs were plentiful. Now, as Long Island tries to figure out what it wants to be next, employment growth is largely in retail and the lower echelons of health care.

Important work, to be sure, but not lucrative enough to get you out of your parents’ place. 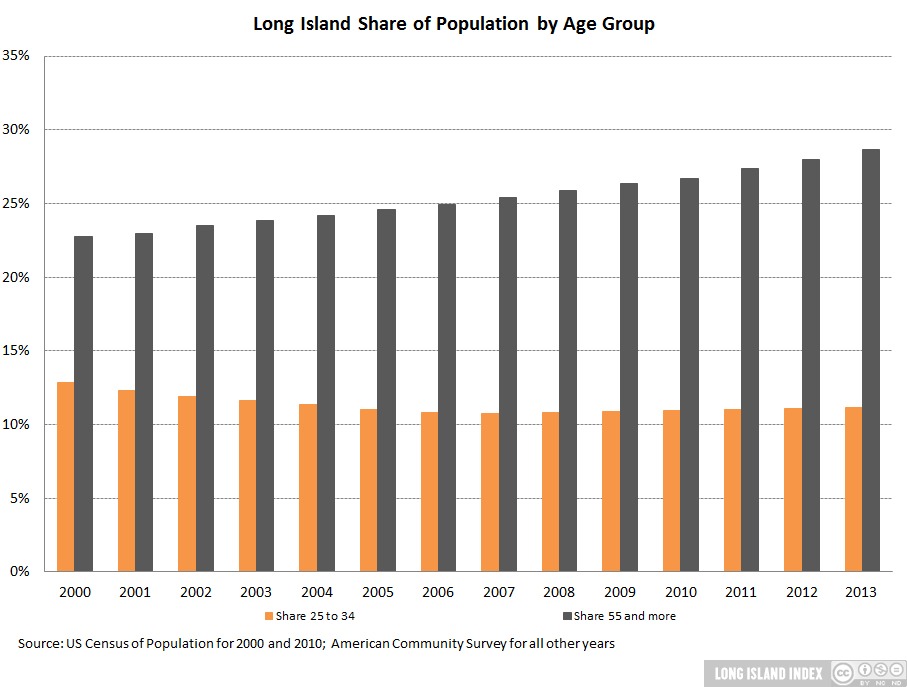 By affordable apartments, I mean units that rent for under $1,000 a month, a rate you can only get now by living in a converted garage or basement, places that are both uncool and rarely located near good bars.

It’s unclear what our business leaders and elected officials plan to do about any of this, but waiting it out is probably not a good option. According to data released recently by the Rauch Foundation, the number of young Long Islanders aged 10 to 29 will decline significantly between now and 2040, meaning the problem shifts a little younger but doesn’t go away.

And remember, 29 is the age young people finally emerge from teen-onset sullenness. We wouldn’t want to miss that.

The real danger of brain drain, however, is not the loss of our youth. It’s the gain of senior citizens, the big chunk of around-50 people now who will be 25 years older in 2040. You know who you are.

According to the Rauch data, the Island will see significant increases in the over-70 population, with peak gains in the fun-loving 74 to 79 crowd.

The numbers don’t start to decline until you hit the 85+ group; no explanation needed there.

It’s not a pretty sight, Long Island. Maybe we should consider building an affordable apartment or two.