Adding a Third Track would increase regional mobility; it would create additional capacity on the congested Main Line, which several branches feed into. (Note: the two existing tracks were laid in 1844 when the population was less than 2% of what it is today.) This capacity would allow LIRR to run more trains, particularly in the reverse commute direction, and would also improve reliability for existing riders. Third Track has the potential to revitalize Long Island’s job market by attracting high-quality professional services and tech jobs, stem the outflow of young workers, generate new tax revenues, and encourage new transit-oriented housing.Have you tried getting from New York City to Long Island during rush hour on the LIRR? Has your train been delayed for hours on end because of a service disruption on a system that lacks flexibility? Can we expect companies to locate here when they can’t access potential employees? Can we expect young professionals to stay here when they can’t find good upwardly mobile jobs?

A report by the Long Island Index shows that investing in Third Track would be nothing short of transformative for the region. As a longtime resident of Syosset and a graduate of Stony Brook University, I was especially pleased to author the report. By 2035, Long Island would have 14,000 more jobs and over 35,000 new residents resulting in an additional $5.6 Billion in GRP and $3.0 Billion in personal income every year. An initial investment of approximately $1 Billion would result in, $40 million in additional sales tax revenue and $103 Million in additional property tax revenue every year to Long Island’s counties, towns, and villages.

We can stand idly by while jobs and young professionals move to other suburban regions that are better connected to New York City and the rest of the metro area. Or, we can invest in Third Track, a project that will pay huge dividends for Long Island. 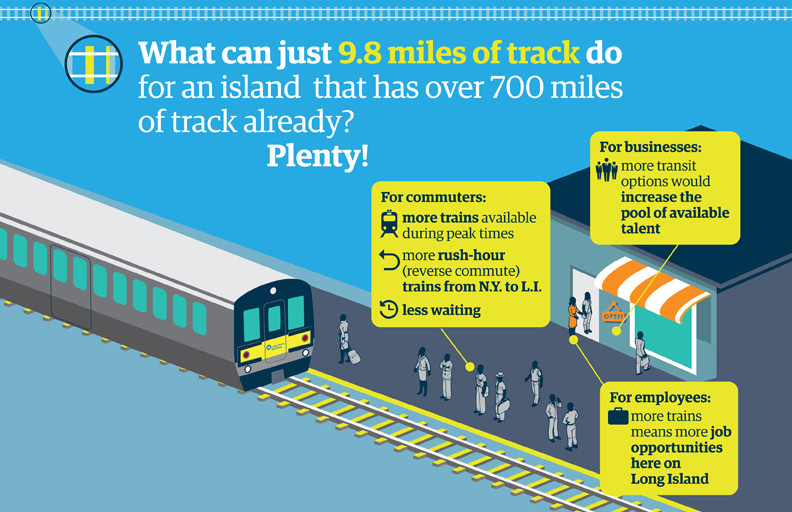 Shuprotim Bhaumik, a resident of Syosset, is a partner at HR&A Advisors.