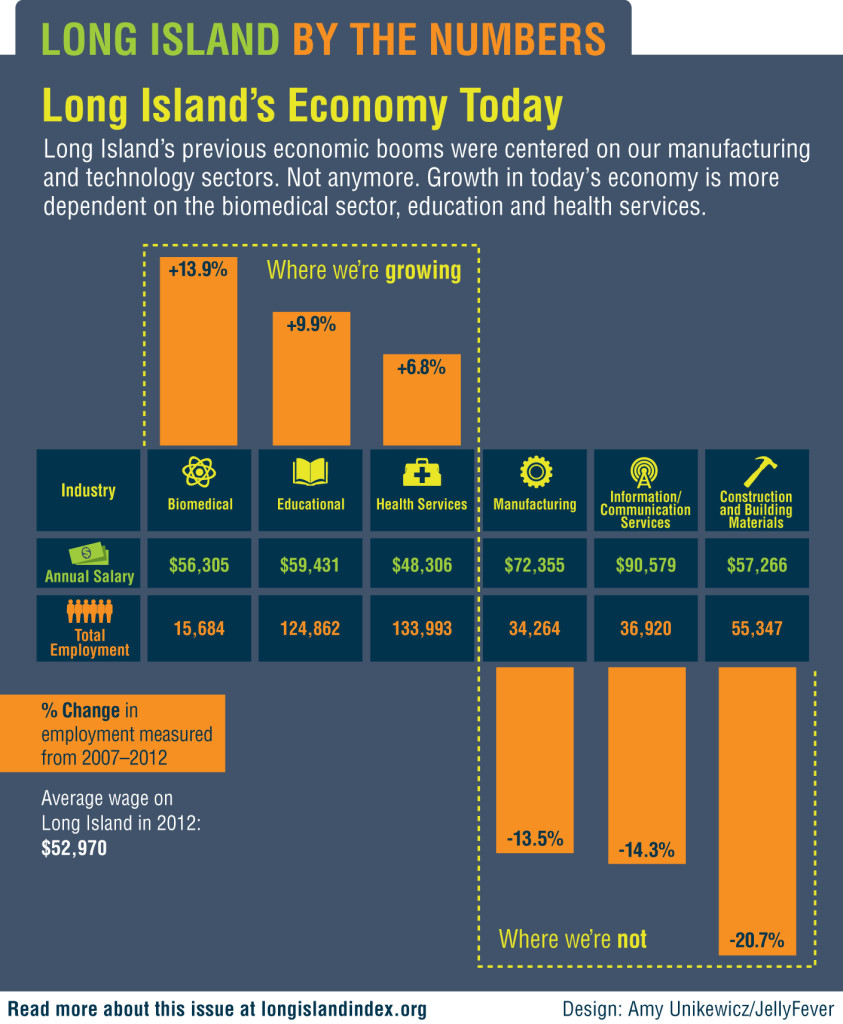 Most recently, Long Island has focused on becoming the nation’s next innovation hot spot, taking advantage of the incredible research that goes on at Cold Spring Harbor Laboratory, Brookhaven National Lab and Stony Brook University.

Incredible is the right word. At Cold Spring Harbor, for instance, researchers are developing ways to turn off the defective genes that cause cancers and control the brain neurons that trigger post-traumatic stress. At Stony Brook, they’re building a heat pump that will revolutionize the way you warm and cool your home and get hot water for the shower.

“With apologies to John Donne, no economy is an island.”

And let’s not forget the Feinstein Center at North Shore-LIJ, where researchers have been perfecting ways to stimulate the body’s Vagus nerves, boosting the immune system to fight maladies all over the body, including arthritis, epilepsy and depression.Out at Brookhaven, staffers have developed a coating that sheds water so well it could eliminate windshield wipers. And transform raincoat fashion. Down the hall, they’re working on a way to “grow” fuel in common strains of grass.

What happens in Vagus, it turns out, doesn’t actually have to stay there.

Other Long Islanders are making waterless concrete, a pill that treats periodontal disease and protein-based drugs that assemble themselves inside diseased cells. Hundreds more innovations are heading out of the labs toward commercialization.

The region’s focus on innovation comes just in time. Without an economic focus to replace its defense industry, the Island has seen job growth slow significantly over the past decade, and its percentage of all New York State jobs is now in decline. According to data compiled by the Rauch Foundation, the local employment growth rate fell to 0.8 percent annually between 2000 and 2010, down from almost 2.5 percent in the 1970s. And many of the jobs that were created were in lower-paying sectors like retail. And marketing.

The continuing loss of young people here is part of the problem, but employment growth from women in the workforce has also fallen dramatically: Female Long Island workers surged by almost 20 percent between 1970 and 1990, but barely 2 percent since.

It’s been an entirely different story in New York City, the place Long Island has so prided itself on not being part of.

Private sector jobs there have jumped 17 percent over the past decade, more than triple the pace of Long Island. The City, in fact, accounts for an astonishing 90 percent of all New York State job growth since 2004.

Yes, many of those jobs were in retail, but technology and health care were the next largest sectors. Innovation, clearly, is its own reward.

First, regions that figure out how to build innovation economies tend to do better than the rest, with strong job creation and growing – not shrinking – populations of smart, vibrant young people. Long Islanders of all ages ought to embrace that future in a giant group hug.

Second, Long Island would have been much better served if we’d celebrated our proximity to New York City, not shrunk from it. Face it, being the Cradle of Aviation isn’t much good once the baby’s left home. Let’s work on that going forward. (Hint to the pols: Third track.)