The urgency is underscored by the tens of thousands of bunker baitfish – also called menhaden – that have died recently in the Peconic River and Flanders Bay.

“Addressing this problem is not an option; it’s essential. Urgency and hope must be our watchwords.”

Ironically, that’s where the hope arrives as well. There is now no doubt about the magnitude of the problem and the culprit, and that provides a basis for unified action. As Richard Amper, Executive Director of the Long Island Pine Barrens Society, says, “All levels of government now agree that the problem is real and that it must be addressed at every level. I’ve never seen anything like it.” Scientists trace the fish carnage to algal blooms fed by elevated levels of nitrogen, which can be attributed in large part to the region’s outdated septic tanks and cesspools.”

The Comprehensive Water Resources Management Plan recently issued by Suffolk County states: “Nitrogen is public water enemy #1, as nitrate contamination from unsewered housing and fertilizer use poses a threat to both drinking water supplies and coastal marine habitat and resources.”

The new “Long Island Sound Report Card”, funded by the Long Island Sound Funders Collaborative – of which the Rauch Foundation, which I lead, is a member – notes that when too much nitrogen enters the water, “it can fuel the growth of algae, creating dense blooms that block the sunlight and reduce oxygen for fish and other organisms.” According to Newsday, “Several recent days have seen zero oxygen levels.” 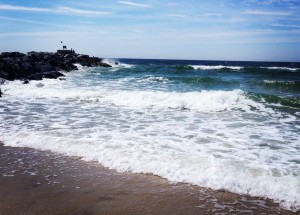 The question is what to do about it, and now a mechanism for determining that has emerged as well. In its recently adopted budget, the State of New York included $5 million for the development of an action plan to address excessive nitrogen in the aquifer in both Nassau and Suffolk counties. The plan is to be developed by the Long Island Regional Planning Council and the New York State Department of Environmental Conservation.

It’s important to note that this is not a study; it’s an action plan. We know what the problem is; we have to decide how to solve it.

The problem is that we’ve put three million people on an island with an ecosystem that does not have the carrying capacity to support that population under current conditions. Those conditions include the fact that 70% of Suffolk County lacks a sewer system, relying instead on often-antiquated cesspools or septic tanks that discharge into the groundwater.

The action plan must address changes needed in both counties. They include upgrading and expanding sewage treatment plants, replacing individual cesspools and septic systems, moving some people onto sewage systems, and reducing nitrogen from lawn maintenance and agriculture. New technology can be especially helpful in controlling nitrogen.

The plan should address what’s feasible, the top priorities, how they should be funded, and in what timeframe. Development of the plan should be completed in time for action to be proposed in the next State budget or legislative session. Urgency must remain aligned with hope.

Key to maintaining the momentum for change will be public engagement with these issues. Fortunately, Long Island has the benefit of the Long Island Clean Water Partnership, formed by four environmental groups: The Nature Conservancy, Long Island Pine Barrens Society, Citizens Campaign for the Environment, and Group for the East End. More than 100 Long Island organizations and businesses and 17,000 individual Long Islanders have joined them in that partnership. Together they are orchestrating a public awareness campaign, which the Rauch Foundation has helped fund.

Long Island is enormously dependent on the quality of our water – for daily living, for our world-renowned beaches and tourism, and for our vital fishing industries. They are all threatened by nitrogen contamination. Addressing this problem is not an option; it’s essential. Urgency and hope must be our watchwords.