Vacant big box stores get a new lease on life.

Near my home in the suburbs of New York City, there’s a vacant supermarket space that’s an eyesore—a blemish on an otherwise bustling commercial strip just off the NYS Thruway. Every time I drive past it, I think that it could be something more useful for the community, like an annex for the community college or maybe a rec center. This idea is not without precedent. There are good examples all around the country of vacant commercial and retail spaces that have been repurposed for other uses. 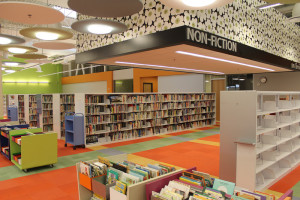 Big box stores, with their (mostly) uninterrupted interior spaces and ample parking, have a lot of potential for reuse.The city of McAllen took an abandoned Wal-Mart and turned the 123,000 square-foot space into the country’s largest single-story public library. On opening day, during the first four hours that the library was open, more than 3,000 people came into the new library. Since the move into the new space, registration has increased by 23%. “It’s elevated the community in a big, big way,” says Priscilla Celina Suárez of McAllen Main Library, “[Residents] are really excited about this big space that’s for them.”

After Joplin High School was destroyed in a deadly tornado in May 2011, the city turned the former Venture department store, which had been vacant for a decade, into the city’s new high school. The catch was that the structure had to be renovated within a 55-day window, as it needed to be completed in time for the start of the school year in August. Reusing an existing building, rather than building anew, made meeting this tight deadline possible. The school houses 1,200 students in 96,000 square feet of space, which, through the use of moveable walls, is broken down into six 200-person “learning communities.” In addition to being a completely digital school (there’s no library—students use school-issued laptops and media rooms to access course content), there is also a student-run coffee bar and IT genius bar.