Wall Street calls them unicorns, as in rare and beautiful to behold.

“There’s a reason, perhaps, that a group of unicorns is called a ‘blessing.’”

They’re privately held startup companies that have reached valuations of at least $1 billion, and lately they’ve been anything but mythical. Slap, Airbnb, Etsy, Instacart, Snapchat – there are at least 80 unicorns out there right now, with more being foaled every day. At least eight have been valued above $10 billion, forcing business writers to come up with the clunky term “decacorn.” (And let’s hope they stop there: Uber, the California-based ride-sharing startup, is worth $40 billion, making it a quadragintacorn.)

Now, Long Island has produced only one recent startup of unicorn size: OSI Pharmaceuticals, which grew into a major player in the genetic therapies market before selling itself to Japan’s Astellas Pharma for $4 billion in 2010. Despite tax benefits and other inducements, Astellas shut down local operations three years later, idling the last 115 workers.

The sale and sayonara deflated many Long Islanders, who took it as further evidence that the region will never achieve its dream of becoming the next hot spot for the life sciences. But OSI was actually a success story for Long Island, proof that the region could produce a significant biotech company, attract giant chunks of venture capital and recruit top talent from around the world. 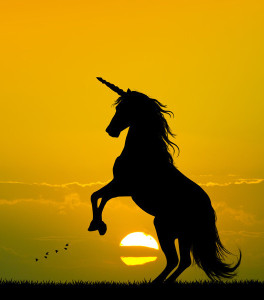 Along the way, the company took over Swissair’s swanky headquarters in Melville and filled the entire Broad Hollow Bioscience Park in Farmingdale. It grew sales to $1.2 billion, went public and created hundreds of very-good-paying jobs. Investors did quite nicely.

Those are just some of the reasons economic development officials remain so keen on promoting the life sciences, and correctly so. Research being done at Cold Spring Harbor Laboratory, Stony Brook University and the Feinstein Center at North Shore-LIJ holds incredible promise for treating cancers, obesity, diabetes, Parkinson’s, PTSD, even periodontal disease.

Many of those therapies will be commercialized right here, potentially creating almost 75,000 new jobs over the next two decades, according to data recently compiled for the Rauch Foundation’s Long Island Index project.

And those will be good-paying jobs, providing the kind of employment young Long Islanders will need if we want them to stay here and one day run the place. Which we do. As long as they stop already with the texting and driving.

Focusing on the life sciences pays dividends in many other ways, from filling empty office space to expanding the local tax base. Without a significant increase in new workers, local property taxes will jump by as much as $7,000 a year by 2040, according to the Index data. With an expanded life sciences sector, the region sees a $15 billion increase in the local economy, yielding an extra $600 million for local government.

So don’t lament OSI’s departure. We had them for 20 very good years. It’s time to move on and help nurture the next unicorn. And the one after that. And the next.

There’s a reason, perhaps, that a group of unicorns is called a “blessing.”