Long Island is facing its greatest economic and environmental challenge ever. The quality of the source of our drinking water and surface water has declined precipitously. We’re seeing it everywhere. Beaches are closing. So are shellfish beds. Hundreds of thousands of fish have been killed. Turtles, too. Why? 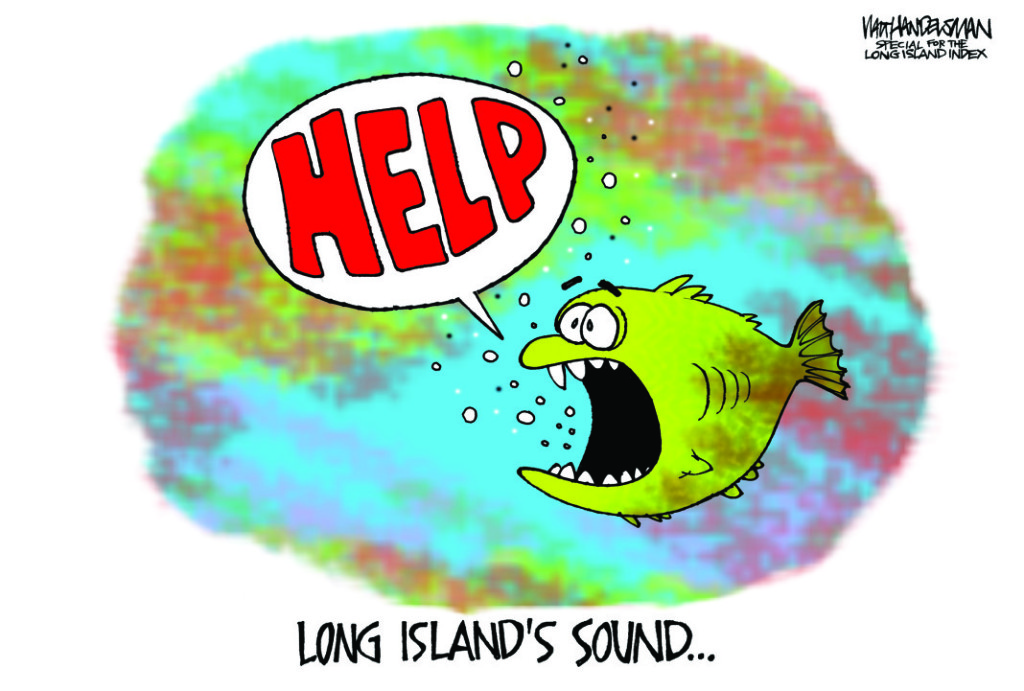 The answer is nitrogen contamination. It comes from wastewater (sewage) and fertilizers. It has increased 200 percent in just the last 20 years. It creates harmful algae blooms that kill off marine life and destroy salt marches. This, in turn, increases the extent of storm surge during severe weather events.

How could this situation have happened and what are we going to do?

Long Island has the first federally designated Sole Source Aquifer, meaning that all of our water comes from beneath our feet. Human activity on the surface contaminates the groundwater below, which is contained in a network of aquifers and on which we depend for all of our water. Alas, Long Island has not been planned very well, and building on environmentally sensitive land as well as improperly managing waste water have taken their toll.

In addition to nitrogen run-off, the contaminants include pesticides and herbicides, toxic chemicals and, now, unused pharmaceutical drugs that we were once encouraged to flush down the toilet. Of course, that was before we learned that these excess prescriptions were also going into our groundwater.

At every level of government there is growing recognition that the groundwater crisis must be addressed. Federal, state, county, town and village governments are all concerned and interested. And the public is squarely behind taking action. A recently conducted poll by The Nature Conservancy says that two-thirds of Long Islanders agree that we must reverse declining water quality.

In Nassau County, 40 percent of the wastewater is routed to the Bay Park Sewage Treatment Plant, which was severely damaged during Hurricane Sandy. Restoration of the plant with improved nitrogen reduction technology is underway. But the full protection of our bays and harbors will require the construction of an ocean outfall pipe to take the treated waste water at least two miles out into the Atlantic for better disposal. Nitrogen reduction is being accomplished on the North Shore with observable success, but salt-water intrusion and other challenges remain there.

In Suffolk, some 360,000 homes have individual cesspools or septic systems that discharge nitrogen directly into our groundwater. A plan to replace these antiquated systems with new nitrogen-reducing systems is getting underway, including a component for government to subsidize the cost to homeowners. One proposal in Suffolk calls for a slight increase in the cost of public water through the imposition of a dollar fee on every thousand gallons of water used. Currently, Long Islanders are paying less for water than 95 percent of the rest of the country. Local environmentalists are calling for a public referendum so that taxpayers can vote on how best to pay for the new systems that will reduce nitrogen by nearly 90 percent.

On the East End, voters will be asked to approve both extension and expansion of its 17-year–old Community Preservation Fund, which has generated more than $1 billion from a 2-percent real estate transfer tax. They will decide whether or not to extend the program and whether to add wastewater management to the open space and farmland preservation components of this successful program. East Enders are particularly opposed to the construction of sewage treatment plants because they’ve seen such plants lead to high-density development, which they dislike.

Another source of nitrogen are fertilizers used on agricultural land and in landscaping. The agriculture lobby has long fought any limitation on fertilizers and pesticides—even now when organic farming and the wine industry have dramatically reduced nitrogen and pesticide use. Long Island agriculture has changed to the point where food represents only 20 percent of local farm products. In recent years, nitrogen-demanding sod and ornamental shrubbery have grown dramatically.

Meanwhile, landscapers and manufacturers of lawn fertilizers have been telling government officials that they can reduce nitrogen content very little while still maintaining emerald green lawns. Frankly, the peril represented by nitrogen in fertilizers may doom certain farm crops and traditional suburban lawns.

The threat of declining water quality is causing a growing commitment to nitrogen reduction with both immediate and long-term results. The Long Island Nitrogen Action Plan, being developed by the New York State Department of Environmental Conservation in partnership with the Long Island Regional Planning Commission, is already underway. It will identify all of the Island’s watersheds, measure current nitrogen loading for each one, and draft regulations on permissible nitrogen levels that are appropriate to each watershed.

Long Islanders are increasingly realizing that when it comes to protecting the quality of our water, failure is not an option.