Long Island makes planning decisions locally but competes for business regionally, and it’s currently losing out because it lacks sufficient housing options, especially for young Long Islanders who are leaving the area in dramatic numbers. A key step in tackling the problem is to understand where multifamily housing exists (or is absent), an understanding local officials have never had on an Island-wide basis.

But that information is now available to Long Islanders in the form of an online interactive map. It’s the first time that data on multifamily housing locations have been collected comprehensively, not only for existing housing but for new projects that are “in the pipeline.” 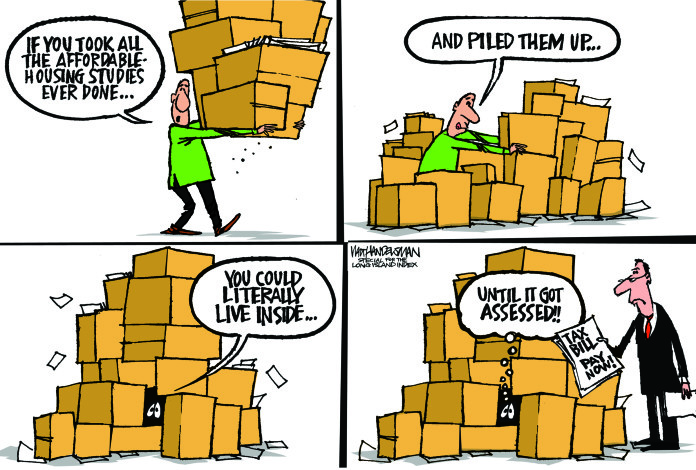 Long Islanders can find answers that were previously unavailable to basic questions about multifamily housing. If you or a member of your family, for instance, wanted to move to an apartment, how far would you have to go and what would your best options be? If you wanted to live in an apartment near a train station, how many choices would you have within a certain distance? If you had a particular train station in mind, what would be your choices?

The map gives Long Islanders an easy-to-use online tool to search for multifamily housing locations—built or underway—in any community in Nassau or Suffolk counties. It not only assists individuals in exploring their own options but allows local planners to understand what’s available in their communities or nearby, and, if they’re interested, broadly view the total multifamily housing stock on Long Island.

It covers every building with three or more attached residential units and includes both rentals and owner-occupied buildings such as co-ops and condominiums. It shows 1,456 rental buildings and 882 co-ops and condos and identifies 113 projects in the pipeline—proposed or under construction.

The map was commissioned by the Long Island Index, a project of the Rauch Foundation, and developed by the Center for Urban Research at the Graduate Center of the City University of New York. When searched by village or hamlet, the map reveals the number of multifamily properties and units, plus a list of local developments. For each housing location, it provides such details as the decade in which it was built, the number of units, and whether the property is subsidized or market rate. It also illuminates trends.

One of those trends is that multifamily housing used to be built closer to train stations. It’s now built farther away from downtowns, where it’s easier to find available parcels and get needed zoning approvals.

Before the 1960s as much as 50 percent of rental housing on Long Island was built near train stations, but that number dropped steadily from the 1970s to 2000. Now only 30 percent of Long Island’s existing rental units in apartment buildings are within a half-mile of a train station.

The map underscores the need to think regionally about increasing Long Island’s housing options, even as the decisions are made locally. For the first time, Long Islanders have a handy tool that illuminates the needs, the opportunities, and the challenges across both counties. Now every community can consider all their options when it comes to finding affordable housing.