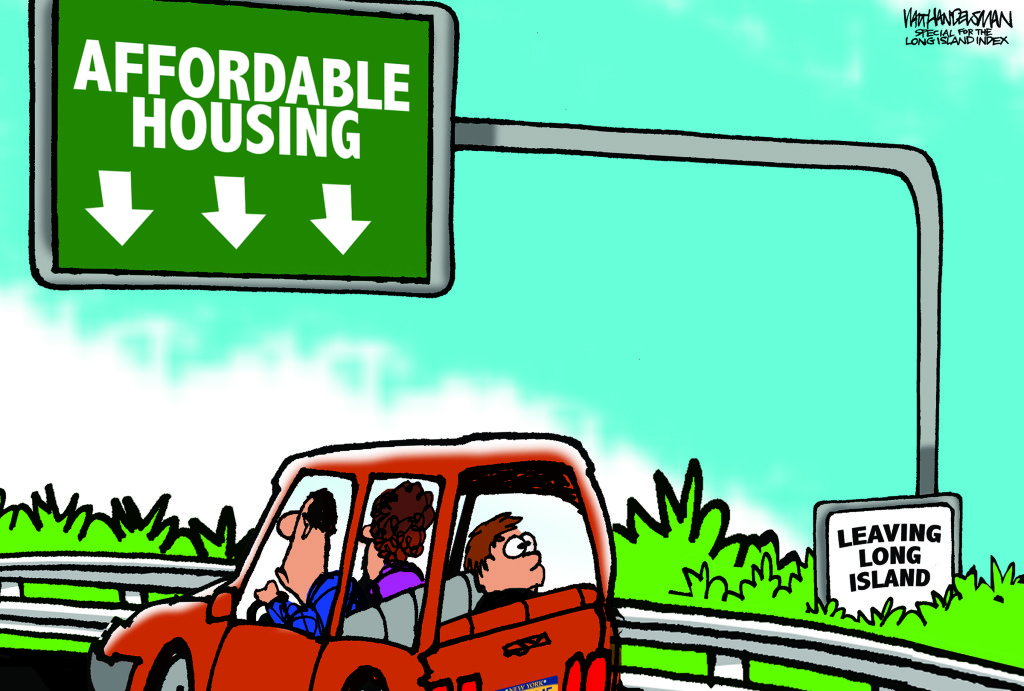 I know that’s not exactly a news flash, but stick with me.

Forget that most of those fears were misplaced and, in some cases, just plain irrational. Renters, for example, actually pay higher per-foot taxes than home owners, and the record shows they produce fewer school-aged children. They also own fewer cars per household, which is understandable given how hard it is to find a parking space at an apartment complex.

“Our young people continue to leave the region in droves, seeking affordable places to live elsewhere.”

No matter. Nobody wanted apartments in their towns or villages and, thanks to local zoning and planning rules, almost nobody got them. As a result, the number of approved rental properties on Long Island flat-lined between 1980 and 2000, leaving developers either to fold their tents or sell out their interest in the stalled projects.

For those who sold, the buyer was often Avalon Bay, a national real estate investment trust that specializes in upscale apartments and has been developing on Long Island—or trying to—for 25 years. It’s managed to complete nine projects in that time, with a tenth set to open later this year. Some have been a dozen years in the making.

But let’s focus on the “expensive.”

Beyond the high cost of land and construction, developers like Avalon can face years of legal and administrative haggling—the firm’s Rockville Centre development required a decade-long court fight—as well as other carrying costs. Community “give backs” can run the tab even higher. As part of Avalon’s negotiations in Garden City, for example, the developer agreed to donate land, make a $1 million contribution to local schools and build vets housing and a farm museum. The company even promised to haul out its own garbage.

Business being business, those costs get passed on to the tenants, helping put new units out of the financial reach of most young Long Islanders, the crowd in most need of affordable places to live. Nonetheless, there’s enough pent-up demand to allow Avalon and others to fill their developments for years to come, earning very nice returns on their investment, however time-consuming, expensive and uncertain it might be.

(And good for them.)

But that’s not a success strategy for Long Island.

Our young people continue to leave the region in droves, seeking affordable places to live elsewhere. They are increasingly joined by their parents’ generation, those around age 50, who either miss their kids or have grown tired of paying the Island’s crazy-high property taxes. The diaspora has begun to affect local businesses, which can’t find the workers they need to expand. That’s the makings of a very dangerous cycle.

Ending the exodus by easing demand and lowering rents will require many, many additional apartments—thousands a year instead of the few hundred being added today. That will require extraordinary resolve on the part of our local elected officials, who must stare down the vocal minority to pass streamlined approvals, place limits on environmental squabbling and enact “as of right” zoning.

Of course, given that we’re the ones who elect the elected, the extraordinary resolve really needs to come from us.

Time for a gut check, friends.