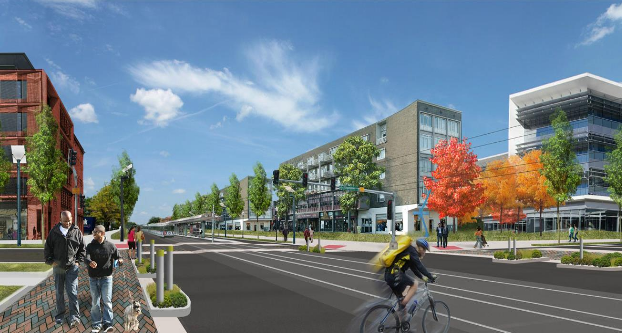 Nassau County’s plan to transform the acres of parking lots around the Coliseum into a hub for medical research and biotechnology is a great first step toward creating the well-paying, “knowledge industry” jobs that can transform the Long Island economy and keep young Long Islanders living here.

But the County’s plan doesn’t make enough of this extraordinary opportunity: 77 acres of prime property located about 20 miles from New York City and controlled by the County and the Town of Hempstead. The plan falls far short of creating the critical mass necessary to get the job done, according to a new report from the Long Island Index, which partnered with the Regional Plan Association and HR&A Advisors.

Creating an innovation district requires a different mix and scale of development, with millions more square feet of rental housing and office and R&D space so that it doesn’t shut down when the last NICE bus leaves the area. Innovation districts, the study noted, need to be 24-7 neighborhoods in which next-gen workers can work, live and play.

Oh, and they need to be well-serviced by high-speed public transit. More on that in a minute.

Developed in the country’s major tech hubs – Seattle, the Bay Area, Denver, Austin, Boston and others – innovation districts have led to significant technology-related job growth while also boosting general economic activity for everything from retail to education and manufacturing. In other words, exactly what we want for Long Island.

As you’d guess, given that it’s anchored by an arena and a soon-to-be-built fun zone, the current plan also features far more entertainment and hospitality development than other innovation spots around the country.

(Which is not to suggest that being able to walk to a Billy Joel concert is a bad thing. But still.)

Another crucial element of the Coliseum project: Significantly enhanced public transportation that would not only shuttle Long Islanders to the site but allow talented New York City workers to reverse commute from the boroughs. There are six LIRR stations in the Coliseum area, but only Mineola – the most distant – offers the train frequency necessary to attract the skilled NYC workers needed for the development of an innovation workforce.

The Index solution is a new rapid bus transit line, the Hubway – love the name – which would run along unused LIRR right of way in the area, speeding innovation workers to the Mineola station, where trains run in peak directions every 10 minutes or so, versus once an hour at other nearby stations.

The study also suggests some tweaks to the existing NICE bus service, to improve timing and better align it with local train schedules, and well-thought-out coordination with the county’s planned LINC service, an 8.5-mile bus loop that would connect Hempstead, Mineola, Roosevelt Field and Nassau Community College.

Sure, these are big ideas. But the opportunity for Long Island is big, too. Given how long the Nassau Hub has been studied and debated, referendumed, hued and cried over, it would be tragically sad if so much potential were left unrealized.

By the numbers: The difference between the County’s  plan and the broader innovation district proposed by the Index study is almost 10,000 more jobs, $30 million in added sales taxes for the County and almost $50 million more for schools.

Let’s do it, Long Island.