Not all children experience economic and social conditions that allow them to perform their best in our public school system. Like poverty, Limited English Proficiency (LEP) is an indicator of students at risk of performing poorly in school. It also reflects Long Island’s changing population and the resulting increase in disparity across schools and districts.

Long Island schools are experiencing steady growth in the number of LEP students. The year 2007 represents the six-year high: In the average school, 6.8% of the students have limited English proficiency. Low-poverty schools on Long Island average very few LEP students, about 2.5% in 2007, essentially the same as previous years. 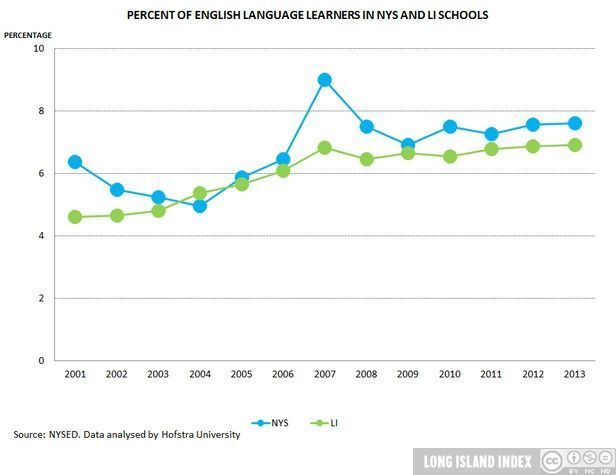 Long Island schools are experiencing steady growth in the number of LEP students.  In 2007, Long Island reached a seven-year high (7%) of the students having limited English proficiency.  The rate between 2007 and 2013 held at about that level.   Low poverty schools on Long Island averaged very few LEP students (2.2%) in 2013, about the same as it was in 2001. Mid-poverty schools saw a slight increase from 3.5% to 4.9% during that same period.

The increase has been most dramatic for high-poverty schools.  In 2001, 15.3% of students in the 10% of schools with the highest rates of poverty were LEP students.  By 2013, 26.2% were LEP students.  This represents an increase of 71% since 2001.  Most all of that increase occurred between 2001 and 2007.  The rate of LEP students in high-poverty schools as remained relatively stable since 2007.  Such schools thus contend with the educational challenges of teaching both high proportions of poor students and high proportions of students with limited English proficiency. 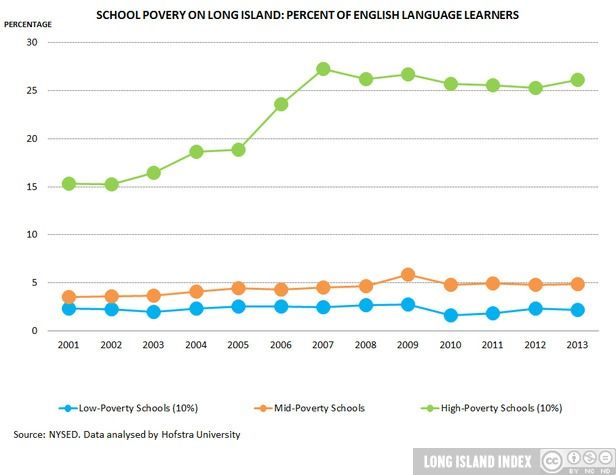