Growth in Wages over the Past 10 Years 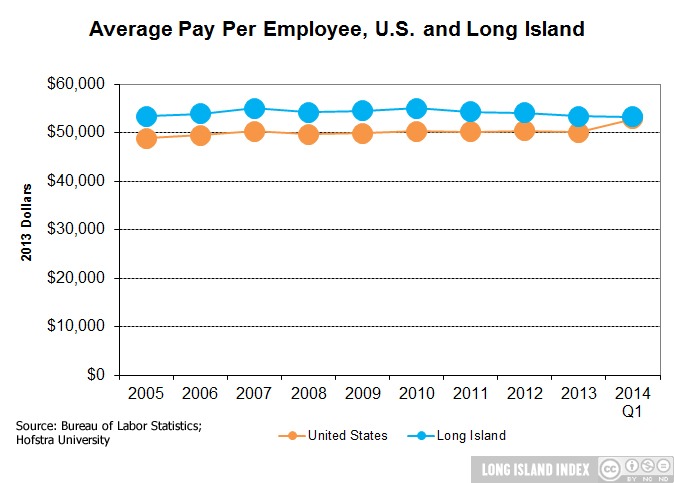 Long Island wages continue a slight downward trend, while converging with U.S. wages which have risen slightly since the recession.  U.S. average pay is on a par with Long Island in first the quarter of 2014.

Average pay per employee is a basic measure of the economy’s health.  Increasing or decreasing inflation-adjusted pay per employee reflects the relative economic vitality of Long Island.  It does not, however, assess whether the returns of economic activity are being distributed equally throughout the workforce

In constant 2013 dollars, pay per employee on Long Island has declined slightly since 2010 (a 3.2% decrease).  For the ten years beginning in 2005, average pay was actually lower in the first quarter of 2014 than at the start of the period.  In the same 10 years the national average has seen an 8.3% growth in pay per employee.  As a consequence,   Long Island’s wage advantage over the rest of the nation has disappeared.  In 2005, Long Island’s pay per employee was 9.3% higher than the national average, while in 2014, the advantage was less than one percent higher. Given that Long Island is a “high cost” region, the convergence with national income levels does not reflect well on the ability of Long Islanders to maintain living standards.