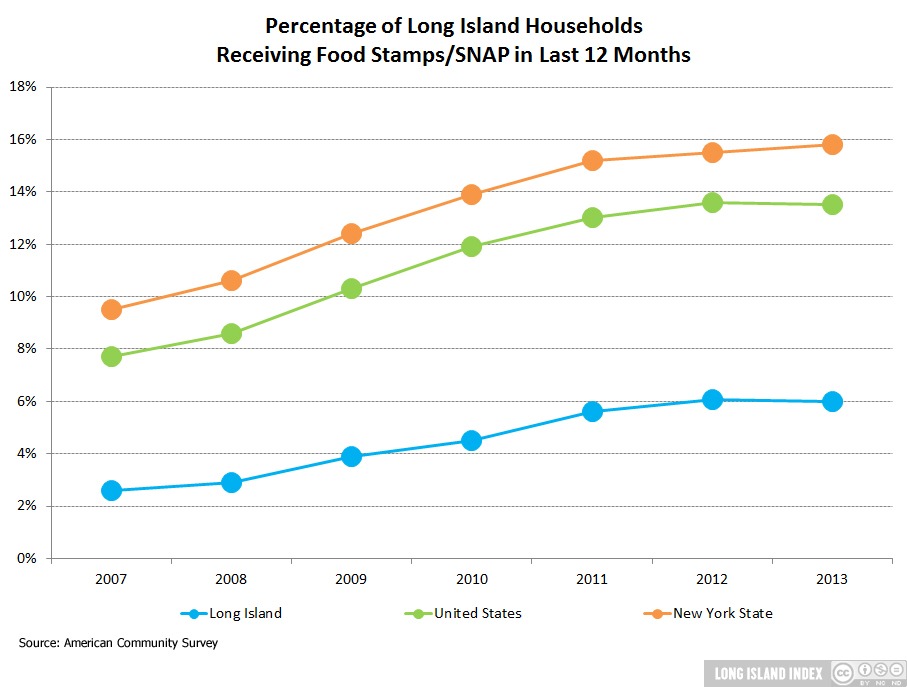 Sharp rise in reliance on food stamps begins to level off.

The existence of a growing population of people without reliable access to adequate nutritious food is a major national concern.  The Food Stamp Program is a nationally funded program that gives low-income families secure access to nutritious foods.  Most food stamp recipients are children and the elderly.

On Long Island in 2013 6% of households received food stamps.  This represents a 132 % increase from 2007.   Since food stamp recipient population was largely stable between 2005 and 2007, this dramatic increase can be attributed to the Great Recession.  While the rates for Long Island are lower than for New York State and for the national as a whole, the trend is very similar.  The NYS rate increased from 9.5% to 15.8% between 2007 and 2013 (a 66% increase).  The rate for the U.S. went from 7.7% to 13.5% (a 75% increase).  Thus, while Long Island’s rates are lower than for the state and nationally, the increase in the percentage of households receiving food stamps increased much more sharply in the past five years.  There is, however, an indication of the rates having leveled off between 2012 and 2013.

Overview: For both individuals and for families, the experience of economic hardship places greater strains on the quality of life in many aspects. The ability to obtain adequate shelter, nutrition, clothing and education are directly tied to one’s economic situation. On Long Island, as in most areas of the country, there has been a steep rise in rates of poverty as well as number of families requiring Food Stamps.