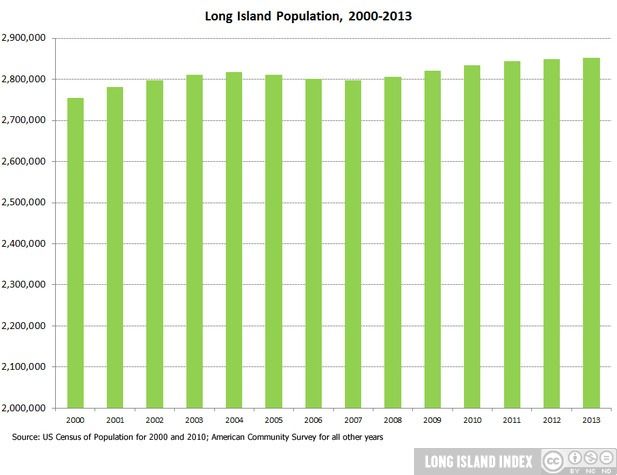 The level of population growth is a fundamental benchmark of how attractive Long Island is as a place to live.  New residents require more housing and services, but can also add to the vibrancy of growing communities, increase sales for local businesses and provide additional tax revenues.  Growth in the working age population is also essential to Long Island’s economy.  Over the long run, slow growth in the number of workers makes it difficult for businesses to expand or even remain in business.  Increasing diversity can provide a cultural richness that many people value, but can also add to social tensions.  In addition, some economists have found that workforce diversity leads to a stronger regional economy. 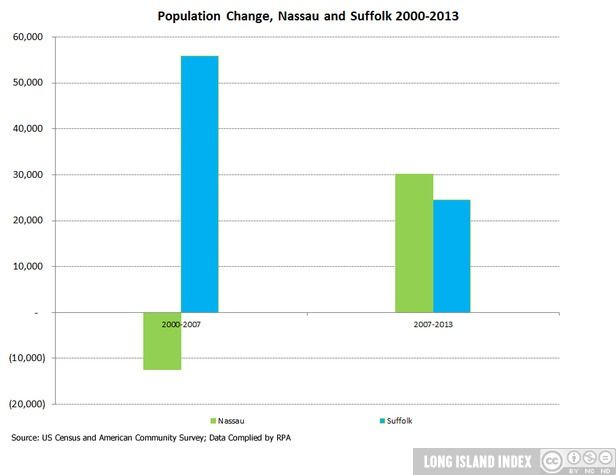 While Nassau County added fewer than 3,000 new residents, less than their growth in 2012, Suffolk County gained less than 500 people for the second consecutive year. This could reflect a region still recovering from super storm Sandy and continued weakness in new housing construction, especially for single-family homes that predominate in Suffolk County. In the six years since the onset of the recession, Nassau has grown slightly faster than Suffolk, a reversal of the Suffolk County’s role in leading Long Island’s population growth since the 1970s. This is even more surprising since housing permits, while low, are still higher for Suffolk than Nassau. Nassau also has an older population so would be likely to have both fewer births and a higher death rate. 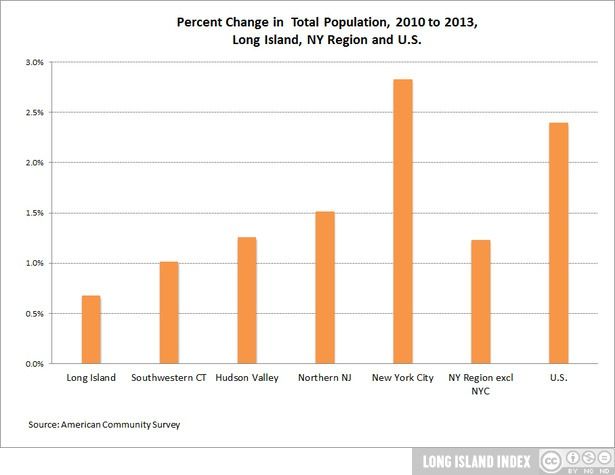 From 2010 to 2013, Long Island’s population has expanded by 0.7%, compared to 1.2% in the other suburban counties surrounding New York City and less than four times the growth in the city itself.  Five years after the official end of the recession, it is clear that New York City, in spite of its high housing costs, has retained its attraction while the suburbs are struggling to regain their footing. Differences in birth rates may account for some of the variation, as well as differences in migration. 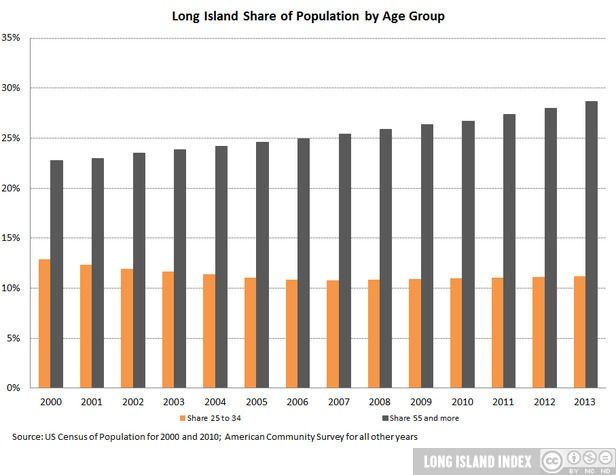 Long Island’s 55+ population is growing by about 2% per year, more than six times the overall rate of population growth. From 2012 to 2013, the number of people over 55 on Long Island grew by 19,000 individuals, or 2.3%, as the baby boom generation continued to age.  Even with many in this age group migrating to Florida and other locations, growth in those approaching and passing retirement age began accelerating in 2007 and is projected to last for another decade.  29% of Nassau and Suffolk residents were over 55 in 2013, up from 25% in 2007.  This trend is happening across the region and across the U.S., but Long Island has a slightly higher share of adults over 55 than other suburban parts of the NY region (27%) and a much higher share than New York City (24%). The number of 25-34 year-olds is an important indicator because this age group includes new entrants to the labor force and many first time home buyers.  After declining as a share of the population through 2007, it has held relatively steady at 11% of the population since then.  This remains slightly less than other suburban parts of the region (12%) and much less than New York City (18%). 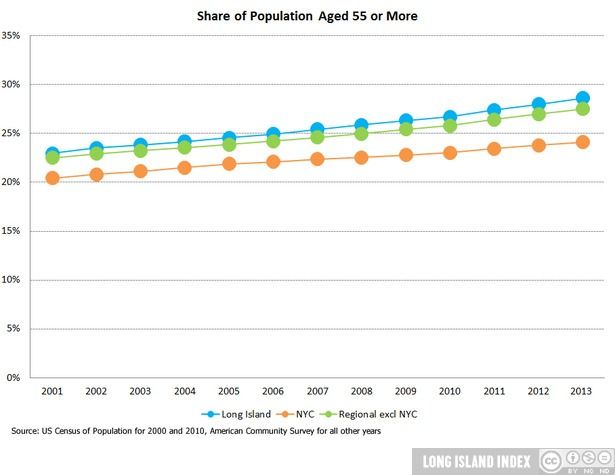 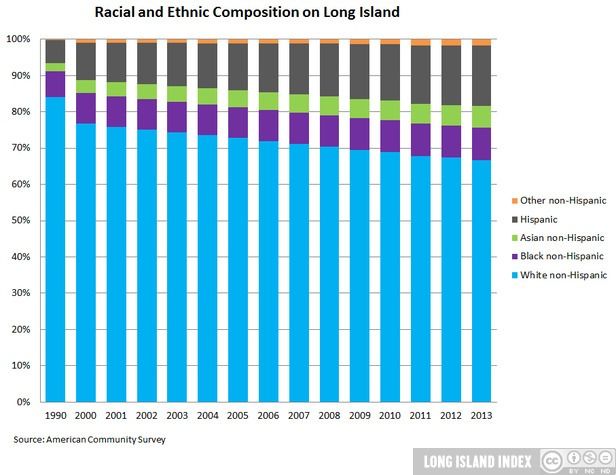 The pace of racial and ethnic change slowed modestly in the last two years, but blacks, Hispanics and Asians continued to increase their share of the population. The number of blacks, Hispanics and Asians all grew in 2013, and the number of white residents continued to decline, although at a slower rate than in recent years.  Asians, in particular, increased in number last year, expanding by 6%. Hispanics and blacks both grew by 2%.  The rate of growth for blacks and Hispanics was slower than in the preceding three years, while for Asians it was somewhat faster.  Nationally, the pace of immigration has slowed in recent years, and this could be affecting Long Island as well.  However, since the non-white population is younger, their share of Long Island’s population can be expected to continue to expand even if immigration continues to slow. Blacks, Hispanics, Asians and other non-whites now represent 33% of Long Island’s population.  As recently as 2000, their share of the population was 25%, and in 1990 it was 16%.  Long Island’s racial and ethnic composition is comparable to southwestern Connecticut, where the non-white share of the population is 33%, and the Hudson Valley, where it is 36%.  However, it is considerably less than northern New Jersey, where 45% of the population is black, Hispanic, Asian or other non-white. 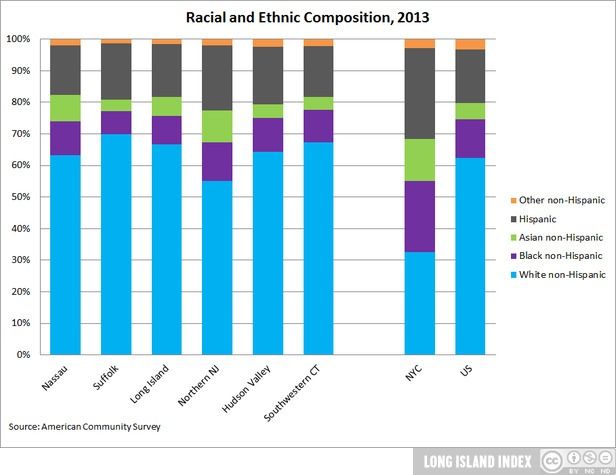 Family composition has changed substantially over the last several decades, and there are now more single person and single parent households than there are couples with children. 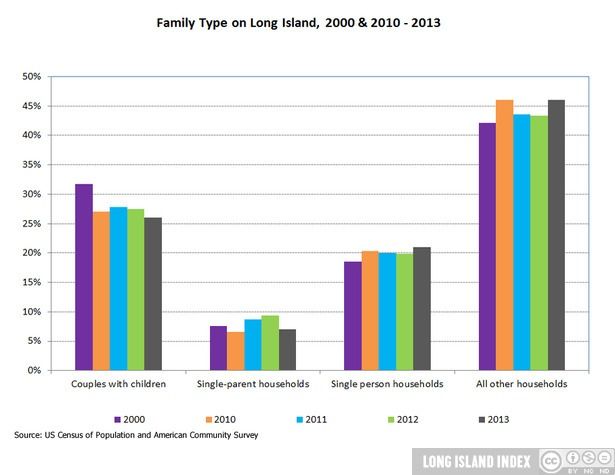 Along with an aging population and greater racial/ethnic diversity, a growing diversity of family types has changed the demographics of Long Island.  There is no longer any such thing as a typical household.  In 1970, couples with children made up over half of all households on Long Island.  In 2013, they constituted only 26% of households. Over the same time period, single households grew from 9% to 21%, couples without children, increased from 35% to 42%, and non-family households grew from 10% to 25%.  From 1970 to 2010 single-parent families grew from 4% to 9%, but declined to 7% in 2013.  While the number of single households continues to grow, for the first time since 1990 there was a decline in single-parent households. 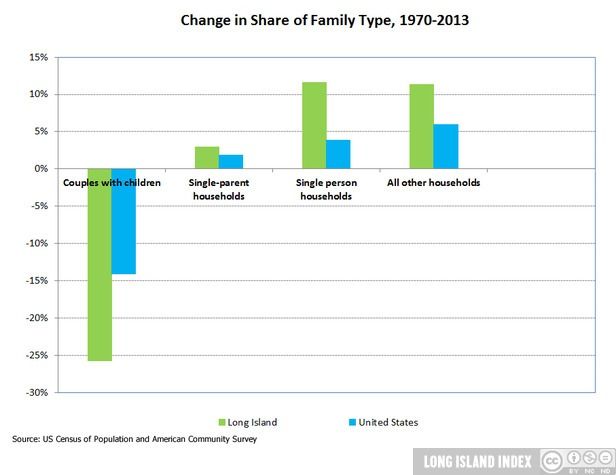 The changes on Long Island are similar to what occurred across the United States over the last four decades, but are somewhat more pronounced. Long Island started with more two-parent families, and the decline was steeper.  Other family types increased at a slightly faster rate.

Overview: The Island today is a far more diverse place than either its past or current images portray. Along with the rest of America, this trend has been growing for decades. The pace of change, however, has been particularly rapid in the last 20 years.