Long Island Railroad added 1.6 million passengers in 2013, while bus ridership declined in BOTH Nassau and Suffolk.

Significant gains in LIRR’s ridership occurred in 2012 and 2013, following several years of decline.  In 2013 the railroad served over 83 million passengers, up from 82 million.

The LIRR’s ridership grew with our recovering economy, although ridership is still well below its 2008 peak of 88.5 million passengers. Metro North maintained its spot as the busiest commuter railroad in the nation, serving just under 84 million passengers, surpassing their pre-recession high of just over 83 million. Across the river in New Jersey, NJT saw a 3% growth between 2012-2013, the most growth of any of the railroads in the region, but was unable to pass the LIRR for the title of the region’s second busiest commuter railroad. NJT was especially hit hard by Sandy, whose floodwaters damaged hundreds of rail cars which were left in low lying yards during the storm by the agency. 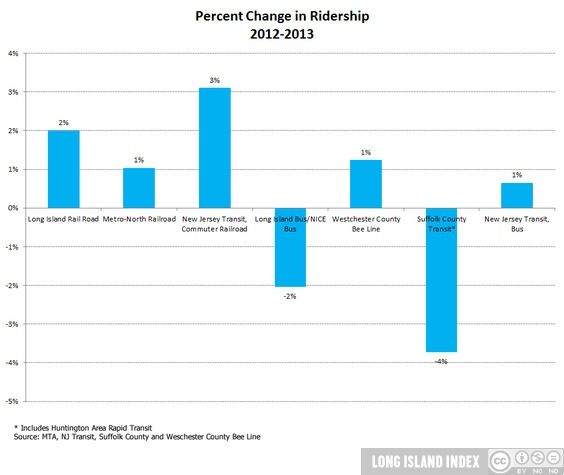 In its second year of operation the Nassau Inter-County Express (NICE) served 28.8 million passengers, about 2% less than 2012.  This also represents a 5% decrease from the MTA’s LI Bus service in 2011 despite new routes and increased service on the heaviest used lines. Between 2012 and 2013 Nassau County did not increase aid to NICE Bus, although over $4 million in State aid was received. Bus ridership declined by an even larger percentage, a drop of 4%, on Suffolk County Transit, a significant change from the rapid growth in Suffolk bus ridership in recent years.. It is possible that damage and displacement caused by Sandy could have affected ridership in both counties. Outside of Long Island, NJT bus and the Westchester County Bee Line both saw their ridership increase from 2012 each by 1% respectively. The Bee Line saw ridership grow by 200,000 and surpassed its record ridership set in 2011.

Overview: Increased transit ridership helps reduce traffic congestion by taking motor vehicles off the road. An efficient transit system can provide quicker access to jobs, reduce air pollution and help to improve the overall livability of our communities. Yet while other suburban regions have been expanding their public transportation options including reverse commutes, Long Island has added no new capacity.