More than ever, Long Island residents are struggling to pay for housing. Since 1980, the Island has lagged behind regional competitors like Northern New Jersey and the Hudson Valley in residential construction. With comparatively little new housing stock and variety, home prices and rents in Long Island have soared. That has made those other areas more attractive to workers—especially younger ones—and the companies that seek them. According to the Long Island Index 2015 Survey, 62 percent of Long Islanders find it difficult to pay their monthly housing costs. That’s the highest percentage in 10 years of surveys. Fortunately, there’s a way to address the problem. 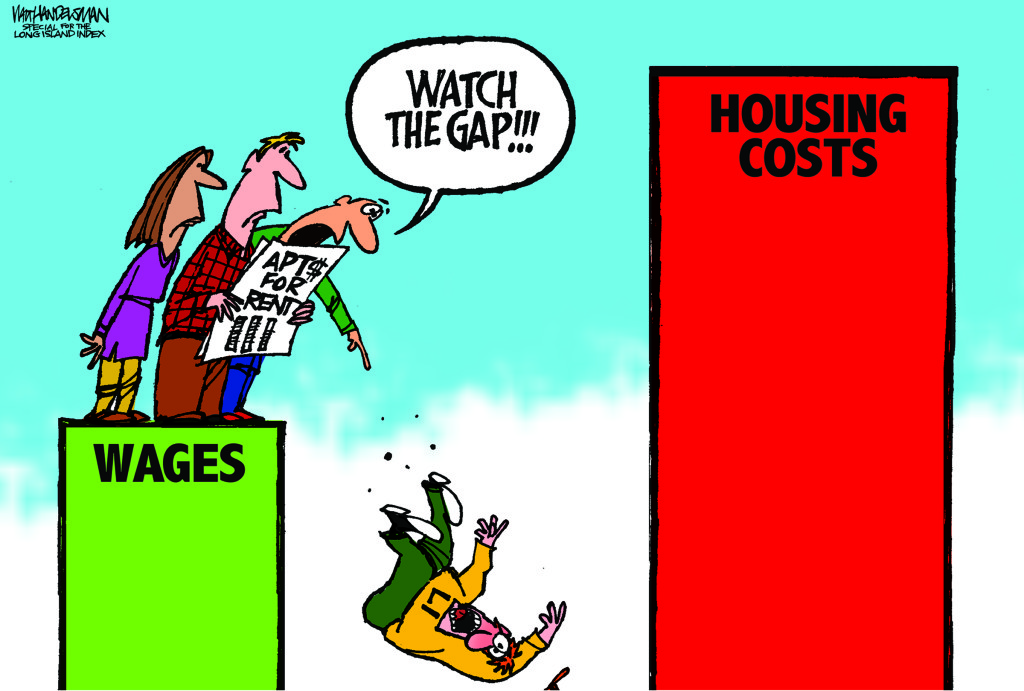 The solution focuses on building multifamily housing in downtown areas, especially transit-oriented ones. Demographic projections show that more than two-thirds of new renters and buyers will want homes in mixed-use communities that are near shopping and public transit. Recent research that my firm conducted for the Long Island Index—contained in a new report titled “Long Island’s Needs for Multifamily Housing”—highlights strategies specific to the  communities of the Village of Babylon, the Hamlet of Hicksville, and the Village of Valley Stream, that, taken together, can provide a model for the rest of Long Island’s towns and villages.

The case studies reveal that modest changes in zoning regulations would allow for higher density and smaller apartments. These zoning changes are just exemplary and do not assume that these three individual communities would necessarily make these changes. But they demonstrate the potential impact that modest changes in individual communities could have if implemented broadly enough. In addition to providing apartments at lower rents, these strategies also have the benefit of producing significantly more multifamily units than currently planned or proposed in Long Island, thereby making a dent in the estimated gap of up to 94,000 multifamily housing units needed on Long Island in the next 15 years.

In Valley Stream, for instance, modest zoning changes could create almost 800 new, more affordable, multifamily housing units on just seven sites in the downtown area. The changes include establishing a minimum unit size of 850 square feet that responds to the needs of singles and smaller households, increasing maximum lot coverage to 60 percent, and increasing the maximum building height from three stories to four stories. These changes could potentially result in reductions in rent of nearly 50 percent by giving a young couple the option to rent an 850-square-foot apartment that is more appropriate for their lifestyle and needs instead of a 1500-square-foot unit that’s mandated under current zoning.

In Hicksville, rezoning several commercial areas as multifamily residential ones, applying 50 percent lot coverage, and establishing new minimum unit sizes could generate over 1,900 new, more affordable, multifamily units. Similarly in Babylon, minor zoning changes—such as increasing density to 20-24 units per acre, establishing a building height limit of up to three stories, and increasing lot coverage to 50 percent—could provide room for more than 200 new, more affordable, multifamily units. The combined effect of these zoning changes could result in the reduction of rents of up to half, a significant economic boost to families in Long Island that are struggling to cover their housing costs.

These are modest changes that are consistent with Long Island’s history of developing multifamily rental units in downtowns before the 1960s. Such developments today would help revitalize those downtowns and make them even more attractive to young people as well as businesses.

Each community on Long Island must decide what course it will set. But failing to respond to the region’s high housing costs will mean that jobs and young people will continue to go elsewhere.

Shuprotim Bhaumik, a resident of Syosset, is a partner at HR&A Advisors, which conducted research for the Long Island Index’s recent report, “Long Island’s Needs for Multifamily Housing.”