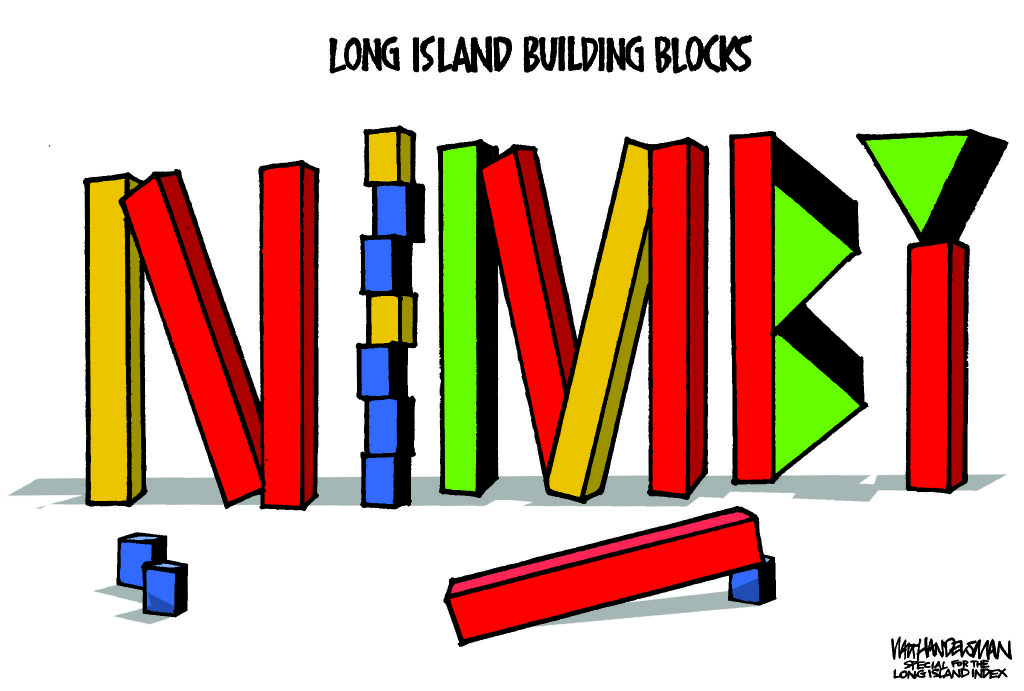 I’ve been involved in the effort to build affordable housing on Long Island for more than three decades–most of that time at the Community Development Corporation of Long Island. One of the most encouraging trends that I’ve seen is the increasing decline of the NIMBY (“Not In My Back Yard”) attitude that has been far too prevalent on Long Island. I’m more hopeful than ever that its decline will now pick up speed.

I understand the instinct. LI is primarily a community of single-family homes. Our homes represent a sizeable investment for every property owner, and it’s natural to want to protect that investment. Local home rule also gives us residents the chance to participate in decisions about how our communities grow, and I’m part of that process in Stony Brook, where I live, as well.

The problem is that the Island is cutting itself out of the job market, because our housing is so expensive. Neighboring suburbs in Westchester, southern Connecticut and northern New Jersey are attracting the businesses and jobs that should be coming here and should be providing employment for our children and growing our tax base.

Affordable housing now addresses a broader need than ever: young people who want to live here but can’t afford it, seniors who want to downsize, people in transitions of one kind or another, and others with lower incomes. The good news is that affordable housing—and the need for it—has evolved to a point where there is growing momentum behind it for a number of reasons.

First, there are more and more positive examples of high-quality affordable housing on Long Island that have now been in place for years and have proven to be an asset to their community. A great example is Patchogue village, which is thriving after about a decade. It’s attracting people who want to live downtown, and they are adding vitality to the area, its restaurants and performing arts.

Early supporters of affordable housing had to operate on faith. Later adopters can see positive examples and operate on proof.

Second, affordable housing is helping rejuvenate many downtowns, and those downtowns are growing in popularity, precisely because they offer added opportunities for dining and entertainment. Even in our single-family homes, we like having more choices when we go out to eat or attend art events and performances.

Third, in communities across LI, residents and government officials are increasingly discussing their planning priorities for downtown development including greater density. That opens up the possibility of affordable housing, because density is key to affordability.

Communities that have embraced these discussions—and the planning that results—have made clear their priorities. Those of us involved in creating affordable housing can then address them.

Fourth, more Long Islanders know people who want and need affordable housing. They may well include their own family members and even their own children.

Part of the change is generational. Young people want rental properties they can afford. They want a lively downtown, where they can live near a train station with easy access to New York City and can have dinner with friends and be entertained.

While the Island has the extraordinary infrastructure of the Long Island Rail Road, which serves many downtowns, affordable transit-oriented housing is far too rare. That reality poses a great threat to the region, because 70 percent of Long Islanders 18- to 34-years-old say they will leave Long Island by 2020, according to the Long Island Index. But that reality also holds great promise.

The housing that we at CDCLI develop serves people with incomes up to 120 percent of the area median income, because we want it to represent a broader mix of income levels. In the last seven years or so, nearly all of the housing that we’ve developed has been rental property that is transit-oriented and also removes blight. These developments are, therefore, a win-win-win–addressing a range of incomes, revitalizing downtowns and removing blight.

Similar victories are stacking up on LI, and their appeal is the reason that I’m optimistic about the future of affordable housing here. NIMBY must increasingly compete with the benefits of well-planned, well-designed, affordable housing and the added reality that building it will enable our children and grandchildren to stay in our region.

Marianne Garvin is president and CEO of the Community Development Corporation of Long Island and president of the National NeighborWorks Association.