Long Island is an ever more inventive place. And I didn’t just think that up. 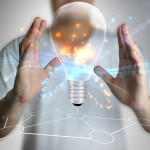 New Hyde Park resident Mary Putre is on the waiting list for “Shark Tank,” the insanely popular TV show on which entrepreneurs pitch their ideas to a group of cranky investors.

They say it could take another year or so to get her on camera.

That’s not because her product – a snow shovel to which icy sludge will not stick – is a potential victim of climate change. The wait reflects the enormous uptick in entrepreneurial activity in our country over the past decade, a surge not seen since the days of Edison and Tesla.

And television is making sure it’s seen: In addition to “Shark Tank,” there’s “American Inventor,” “Quirky” and “Make Me A Millionaire Inventor.” “The Profit,” “Project Runway” and, for a time, shows called “Crowd Rules” and “Does Somebody Have to Go?”

And that’s not counting all the Please Save My Failing Restaurant or Bar or Hotel or Other Business shows.

(Wish I’d thought of that.)

The reasons for this inventive surge are many. Low-cost computers and software, Cloud storage and smartphones now allow almost anyone to set up shop in the guest room. Crowdfunding has brought venture capital to the masses. And the Internet offers an inexhaustible trove of advice, data and sales leads.

Much of it true.

The final mapping of the human genome a decade ago has led to a tide of new biotech companies that will cure cancer and heart disease, harness the body’s immunization system and reverse balding.

OK, I’m kidding about the balding, but they’re doing some pretty amazing stuff. And similar strides are being made in renewable energy, information technology, computational science and space exploration.

And there are millions of Mary Putres out there, too, intent on bringing better snow shovels to market. She also has a hands-free dog leash and an unsinkable tea bag, by the way.

It turns out Long Island is especially well suited for all this entrepreneurial hot-beddedness. In addition to our top-shelf research facilities and universities, we have globally significant wireless, composite and clean energy initiatives underway, plus thousands of former aerospace engineers roaming about hoping to recapture their prime.

Thousands of other Long Islanders became “necessity entrepreneurs” during the Great Recession, and many have decided they’d rather stick to their startups than get back in bed with The Man.

We’re a little short on millennials, the young people who are expected to drive the next wave of American invention, but not to worry. According to the most recent Kauffman Index of Entrepreneurial Activity, those aged 45 to 64 are now responsible for more than 53 percent of all U.S. startups, an increase of 22 percent over the past decade.

As you may have heard, we have many, many residents in the 45 to 64 age group. And even older.

Which makes setting up shop in the guest room all the more enticing.

You know, the naps.